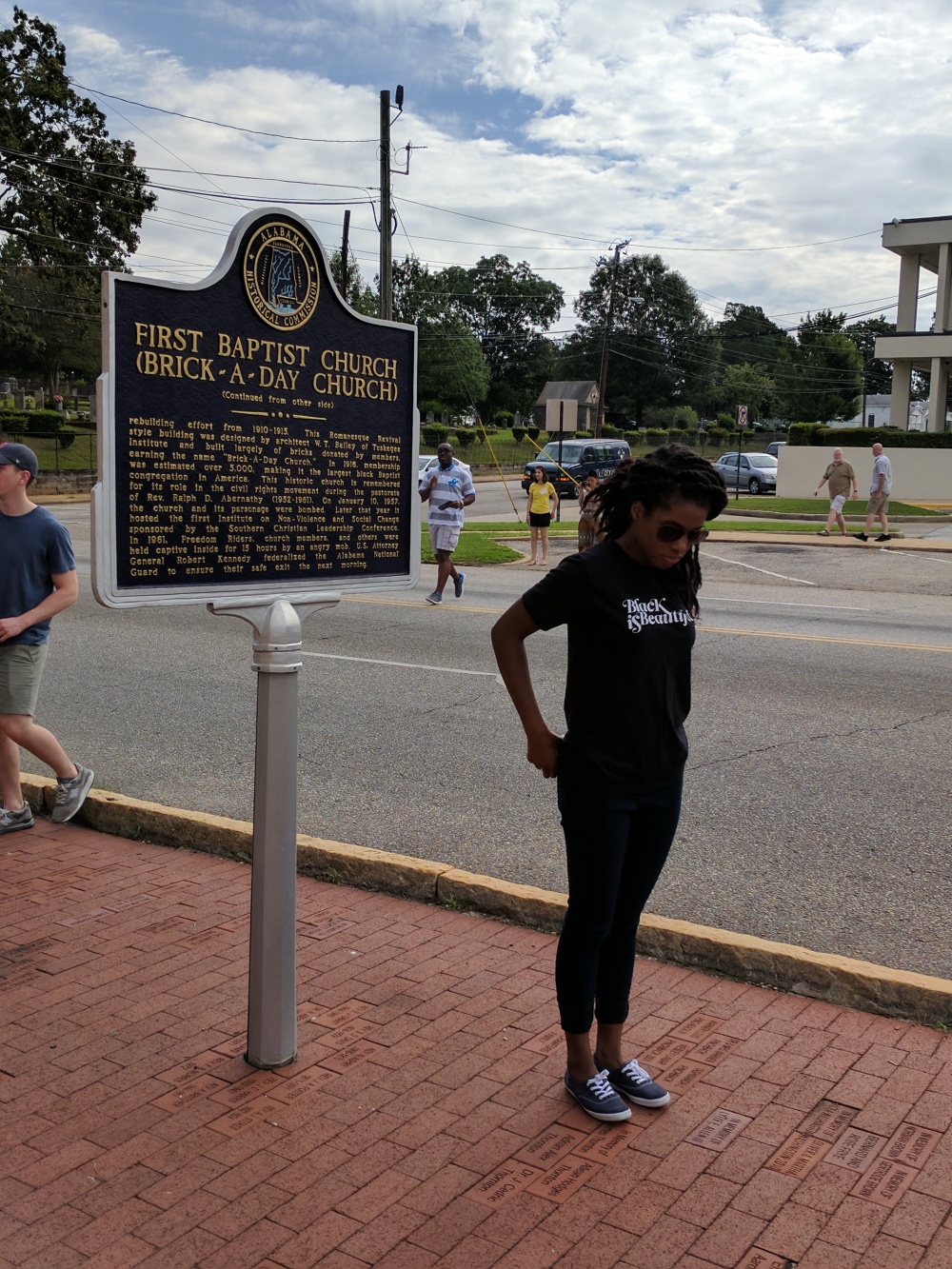 Photo taken by the group’s photographer.

The day began with a rush to visit historical sites in Montgomery. The rain dampened our schedule the day before, yet luckily there was enough time to visit the former homes and churches of civil rights leaders including Martin Luther King Jr., Ralph Albernathy, and Johnnie Carr. Once downtown, our group visited the capitol building where the Selma to Montgomery boycott concluded with a speech from Dr. King.

Our leader, Todd Allen, said something about Davis’ statue being up the steps; therefore, I made it my mission to kick it with two state troopers parked bellow. I did it for the people. Just down the block from the capitol building stood Dexter Avenue King Memorial Baptist Church. Designated as a historical landmark in the mid-1970s, the church holds a rich history. It was there Dr. King Jr. and others in the Montgomery Improvement Association, including civil rights leader and pastor Abernathy organized the city’s bus boycott. King also served as pastor for six years succeeding civil rights activist Vernon Jones.

Following a brief self-guided walking tour, our next destination was the Equal Justice Initiative (EJI). Now if you are familiar with the work of Bryan Stevenson and his best-selling work Just Mercy, you are somewhat familiar with the mission of EJI.

“The Equal Justice Initiative is committed to ending mass incarceration and excessive punishment in the United States, to challenging racial and economic injustice, and to protecting basic human rights for the most vulnerable people in American society.”

Outside of their commitment to ending mass incarceration and excessive punishment, EJI spearheaded several historical projects on lynchings including a digital project with Google about lynchings in America. This serves as part of the organization’s Community Remembrance Project. Its mission–“to recognize the victims of lynching by collecting soil from lynching sites and creating a memorial that acknowledges the horrors of racial injustice.” Their mission also extended into the collection of soil from each documented lynching site in Alabama. On the outside of the jars are names of a lynching victim, the date in which the lynching took place, and location. These jars rest on a wall in EJI. It is simply one wall; however, it is the most painful wall I stood in front of. I froze with tears in my eyes. I know and study America’s ugly past, but still I was at a loss for words.

Three blank jars with no first names, just the same last names and dates. A family was lynched.

Many jars marked with the name unknown.

The wall of jars. They have a wall of jars from each documented lynching site in Alabama. A wall of lost stories, painful histories, and painful truths of this “great” America. Then comes a parade of photos. People no longer reflect or dwell in the moment instead we take photos. Then crack a joke whether we know what we stand in front of or not.

There are nearly 4,000 documented cases of lynchings with thousands of undocumented stories. What is it like to learn that the land you own, the land of your childhood, and the land where you and your children once played was the same land an innocent Black man or woman was lynched. Black bodies once swung from your trees. How do you reconcile with that knowing that your home is a national historic site of hate.

One thought on “Day 4: The Equal Justice Institute(Part I)”